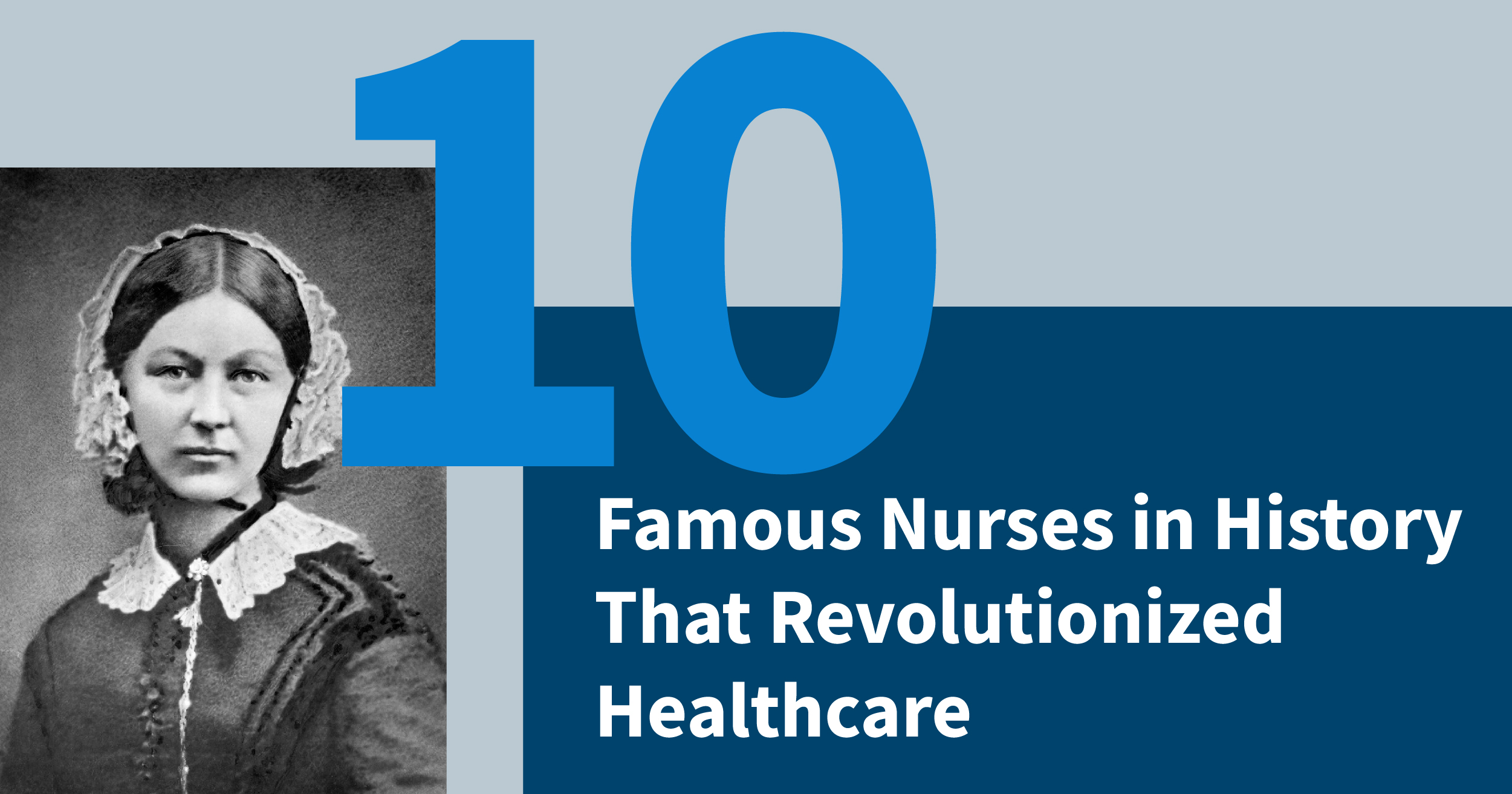 We talk a lot about Florence Nightingale, founder of modern nursing, because our institution was founded on holistic nursing principals. But many other visionary nurses made history, too, with their discoveries, compassion, practices, and activism. Even the brave, unnamed nurses whose sacrifices are lost to history, deserve recognition for their contributions to the healthcare field.

While some nurses may not make the headlines, we can acknowledge them for their bravery and learn from their examples. Learn how 10 historical nurses contributed to the field and discover inspiration for making a difference in the world.

Known as the founder of modern nursing, Florence Nightingale (1820–1910) made history advocating for patient and human rights. The British nursing pioneer established a model of advocacy and the whole-being concept of holistic nursing, bringing evidence-based care to even the poorest and sickest members of society. She raised standards of care for all patients, first making her mark in history during the Crimean War in 1853.

In 1907 she became the first woman to be awarded the British Order of Merit. Nightingale continues to inspire the mission of holistic nursing here and around the world.

You might have studied his “Leaves of Grass,” but did you know this Civil War era poet was also a nurse? Walt Whitman (1819–1892) joined the ranks of nurses when his brother George was wounded in the Battle of Fredericksburg in 1862.

While his brother’s injury was minor, Whitman was deeply affected by the gruesome conditions of the first hospital he encountered. He continued to care for wounded soldiers throughout the duration of the Civil War and recorded camp life in his journal — which later became the inspiration for his poetry and prose, including “The Great Army of the Sick.”

Clara Barton (1821–1912) is best known for founding the American Red Cross, but her story is a great example of the way nurses are always working to make the world a better place for those in need. Barton became a teacher at age 17 and helped children of low-income workers get an education. She was part of the women’s suffrage and other civil rights movements, paving the way for women’s rights by demanding equal pay, and later earning it, in the U.S. Patent Office.

Earning the nickname “Angel of the Battlefield” during the Civil War, Barton risked her life delivering food and life-saving supplies at midnight, by mule, to soldiers on the front lines. After the war, she implemented a program identifying the graves of 13,000 missing Union soldiers.

As the first African-American registered nurse in the United States, Mary Eliza Mahoney (1845–1926) played an instrumental role in paving the way for nurses of color to join the profession. Mahoney worked at a hospital for 15 years as an untrained practical nurse and janitor at the New England Hospital for Women and Children before she was accepted to nursing school — eventually graduating in 1879. She went on to become the director of the Howard Orphan Asylum through the end of her career.

As a black woman in a public profession, Mahoney faced extreme discrimination throughout her distinguished career. Nevertheless, she worked as a nurse for the next 40 years of her life, opening doors for other African-American nurses in the field. Mahoney gave the founding address to the National Black Nurses Association in 1908 and posthumously received a host of awards.

Civil War activist Dorothea Dix (1802–1887) advocated for humane treatment of both the mentally ill and indigenous peoples. Throughout her life, she founded or expanded over 30 hospitals for the mentally ill and was a champion of the notion that mental illness was treatable — a novel idea at the time.

Dix became a school teacher and achieved relative fame by publishing a book for teachers, suggesting that women should be educated at the same level as men. A chronic illness forced her teaching career to end, but as she convalesced in England in 1836, she met several British prison reformers and mental health professionals. Dix’s exposure to reform ideas in England, combined with her experience teaching Sunday school to jailed female convicts, sparked her research of the treatment of the mentally ill.

It’s difficult to separate the work of Margaret Sanger (1879–1966) from controversy involving Planned Parenthood, but her influence on the world of nursing is undeniable. Sanger was born under the Comstock Act, which criminalized contraceptives. After watching her mother die at age 50, following 11 childbirths and seven miscarriages, Sanger attended nursing school in New York City’s Lower East Side. There she found herself frequently caring for the mothers of large, poor immigrant families who had taken abortion efforts into their own hands.

In 1914, the nurse coined the term “birth control” and two years later was arrested for opening the first birth control clinic in the country. Sanger founded the American Birth Control League, which later became Planned Parenthood. Her research and advocacy spanned methods that included condoms, diaphragms, and, in 1960, the birth control pill.

As a nursing advocate and activist, Barbara Lumpkin’s (1937–2018) contributions to the nursing field came in the form of legislative moves aimed to help registered nurse practitioners and physician assistants to prescribe controlled medications in her own state of Florida. The Barbara Lumpkin Prescribing Act went into effect in January 2017 and was named for the nurse who spent over two decades lobbying for the change she knew would empower nurses and bring better care to patients — especially patients in rural areas with limited financial resources to get the care they need.

After graduating from nursing school in 1958, Lumpkin practiced as a nurse for 16 years before joining the Florida Nurses Association and pursuing the policy work that led to the passing of this bill.

Luther Christman (1915–2011) was a nurse who made big changes as an educator and administrator in the nursing field. He made a name for himself as a champion of racial and gender diversity in nursing, and he was the first male dean of a nursing school. Christman eventually founded the American Association for Men in Nursing, which serves as a resource for men interested in breaking into a field once largely associated with women.

While working as the dean at Rush University College of Nursing in the 1970s, Christman helped create and implement the Rush Model of Nursing. This model emphasizes the commingling of education and practice for nursing schools. More educators were practicing clinicians themselves, transforming the way future nurses chart their path from coursework to career.

Anna Caroline Maxwell (1851–1929) is known for making field hospitals much more conducive to the health of wounded patients during battle, particularly in the Spanish-American war. Her achievements were so impactful, that she is the reason nurses started gaining recognition within the military. Maxwell’s efforts had already helped the establishment of the Army Nurse Corps back in 1901, but her work also led to the decision to give nurses military rank. She even helped design the uniforms for American army nurses.

Another of Maxwell’s military nursing accomplishments was training new nurses headed to serve the country in World War 1. She dedicated her retirement to bettering the nursing profession in terms of education, standardization, and facility quality. This made her peers look to her as a valuable nursing leader. Upon her death, Maxwell was the first woman to be buried in Arlington National Cemetery with full military honor.

Peggy Anderson (1938–2016) is a unique nursing leader in that she was never a nurse at all! A Peace Corps volunteer and successful journalist, Anderson wrote Nurse: The True Story of Mary Benjamin, R.N., the best-selling 1978 book chronicling the daily life of a nurse. Raised as the daughter of a nurse, Anderson didn’t appreciate many of the inaccurate cultural portrayals of nurses she saw in movies and on television.

Setting out to prove that nursing is a challenging and rewarding calling that requires immense skill, the writer found a working nurse to interview about her profession. The book became so popular that it was turned into the 1981 television series, Nurse.

Our students recognize the impact of holistic nursing and its history of patient advocacy and compassion every day. To learn more about our nursing, RN-BSN, or other healthcare programs, visit our program pages or call us at (801) 948-2137.

Characteristics of Professionalism in Healthcare

Some personality traits, like respect, patience, and punctuality are valuable skills at work and in life. And other traits, like... 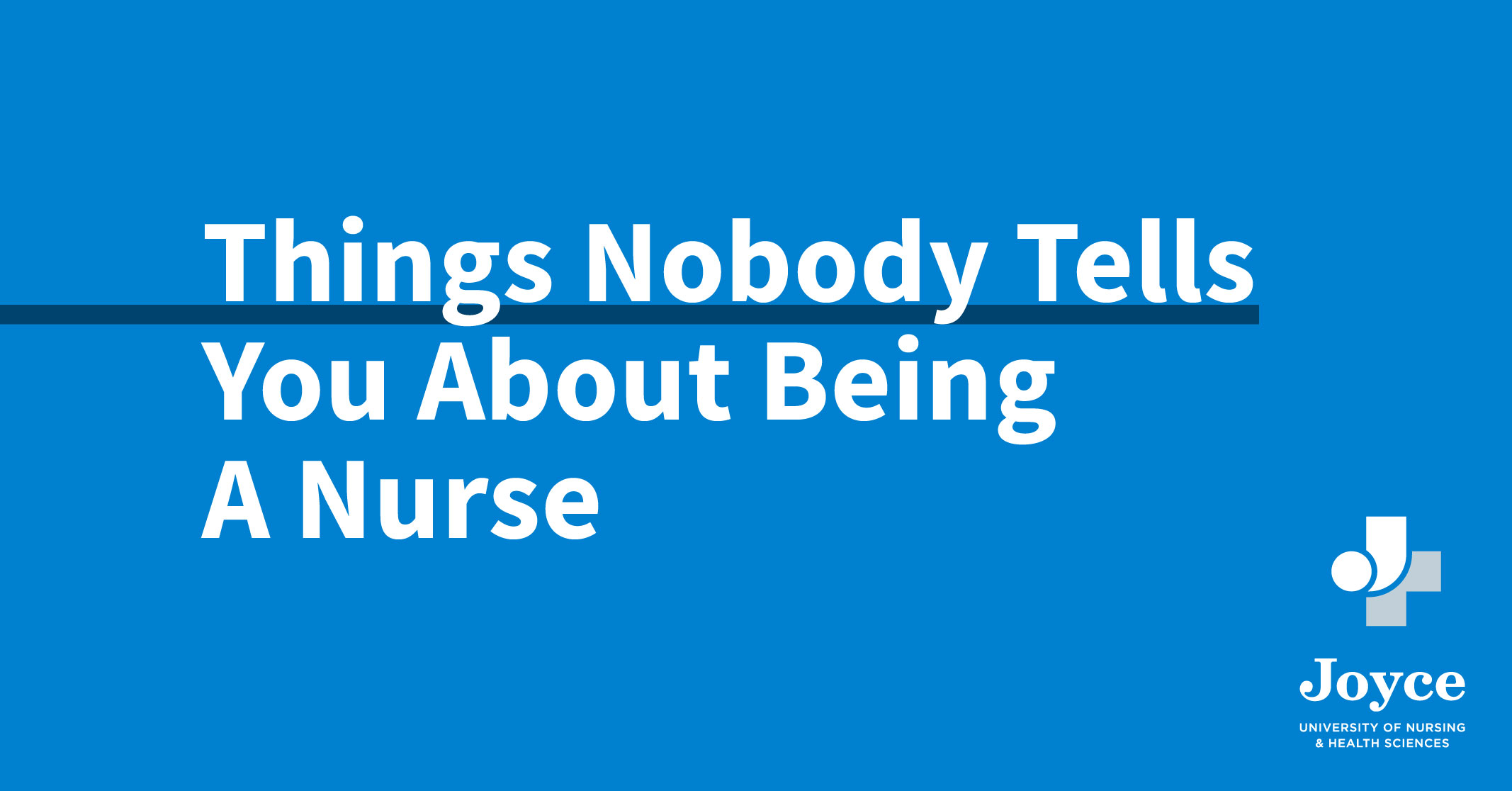 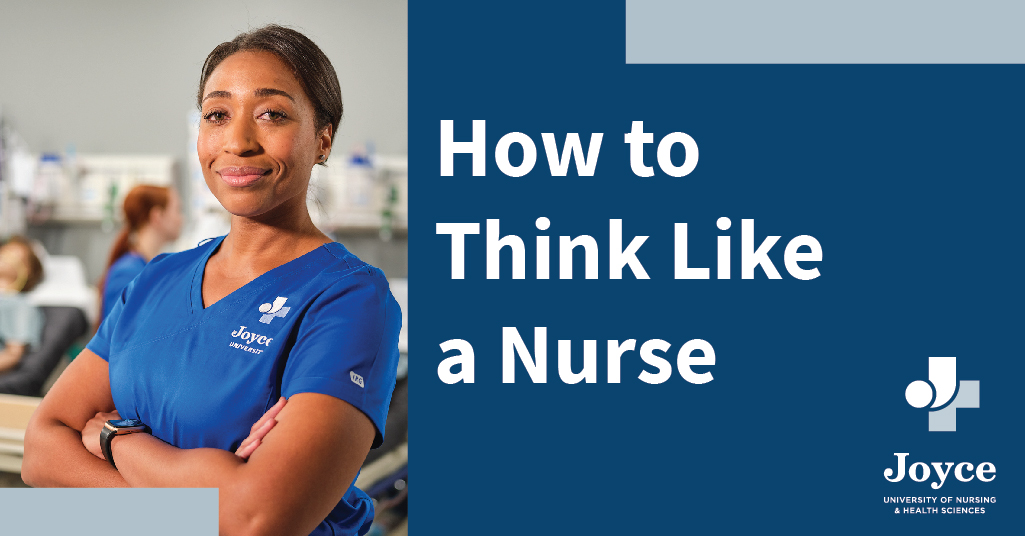 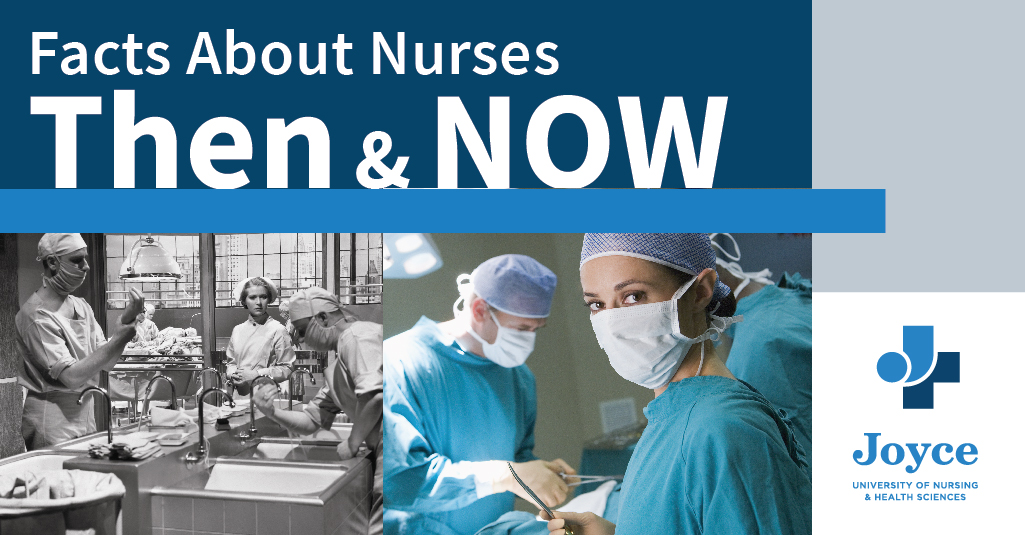 Facts About Nurses Then and Now

The nursing profession is constantly evolving. From scrub design to medication deliver, here are a few “then and now” facts... 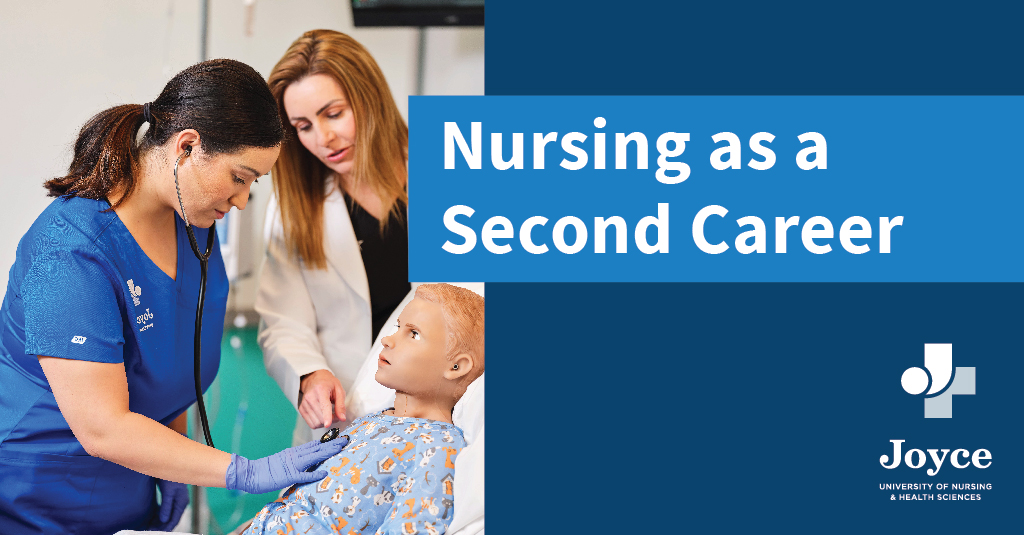 Why You Should Consider Nursing as a Second Career

A second — or third, or fourth — career is a relatively new phenomenon. Our grandparents often had one job... 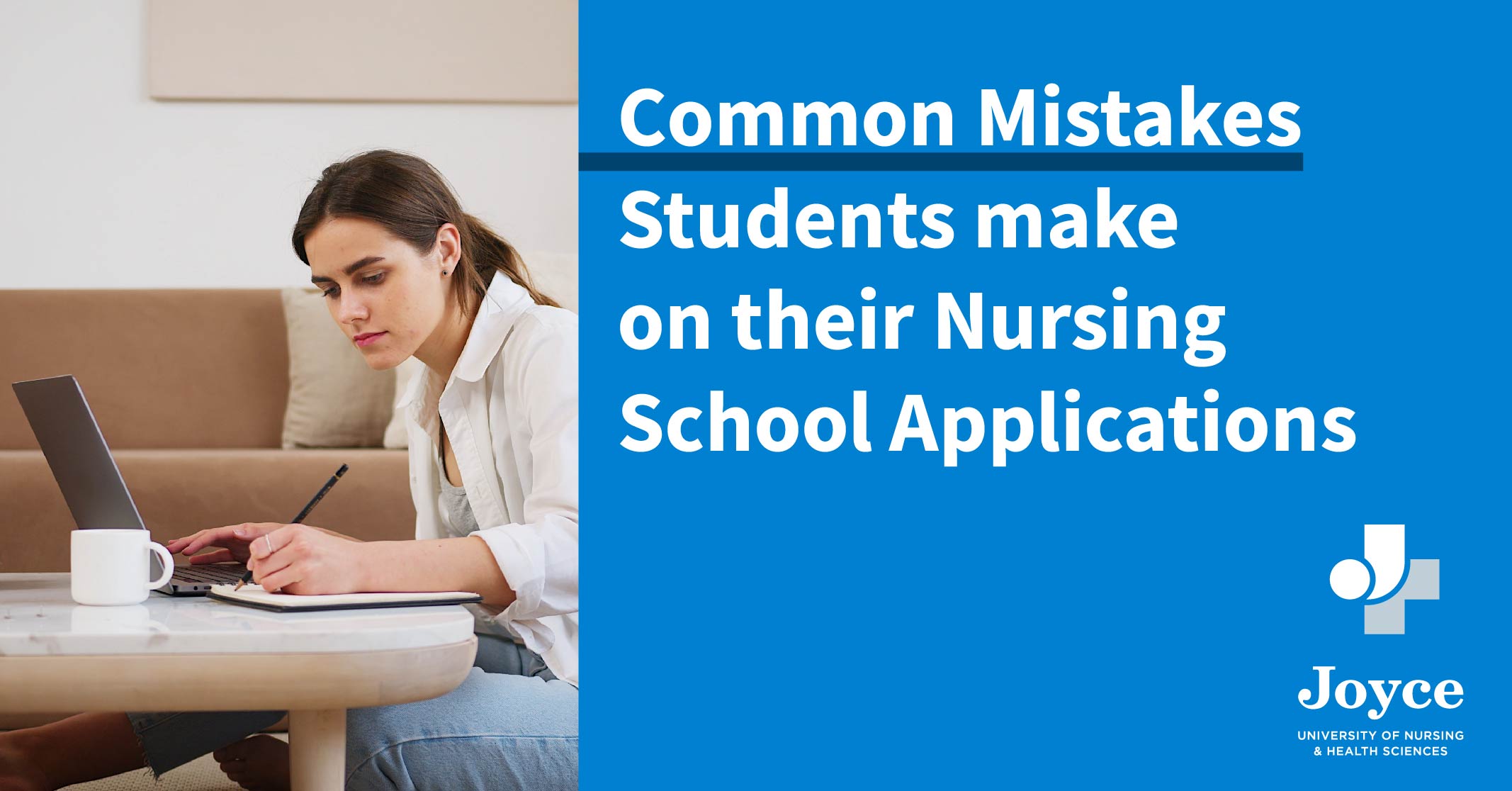 There are few things dreaded more in life than the college application. Of course, in the end, applying to nursing...

[contact-form-7 id="143" title="Request Info"]
By pressing "Request Information" I hereby consent and agree to receive calls, text or other messages by or on behalf of Joyce University of Nursing & Health Sciences at the phone number(s) provided above. I understand that the foregoing consent is not a condition of program application or enrollment and agree that the terms of the privacy policy apply. * Required